More than 400 girls from Baringo underwent an alternative rite of passage other than the outlawed female genital mutilation (FGM) and early marriages.

The girls between ages of nine to 16 years from Mochongoi, Kisanana, Ilchamus and Mukutani wards graduated at Sandai African Inland Church grounds in Baringo South Sub County after a week of training and sensitization.

County first lady Ivy Kiptis noted that the retrogressive practice which is still practiced by some of the communities in the region has claimed several lives of brilliant minds of hard working girls in the society. 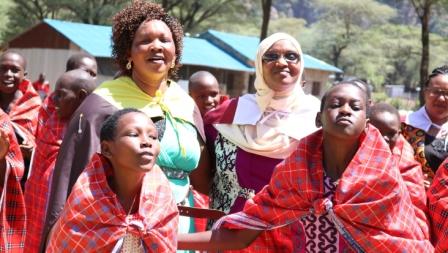 Mrs Kiptis stated that the alternative rite of passage will be initiated every year in order to instill good morals and guide the girls not to participate in engagements that promote early marriages.

“I am determined to ensure cases of early marriages and FGM comes to an end in Baringo County so that our girls get enough time to concentrate in their education,” she assured.

The County first lady urged the girls to observe what they have learnt during the entire training period in order to make the fight against FGM and early marriage a success in the vast county.

Trans Nzoia first lady Lydia Khaemba who also joined Baringo first lady during the occasion urged fathers from pastoral communities to be in the forefront in advocating for Anti-FGM and early marriage.

Mrs Khaemba said young girls are talented people who need protection from both parents because they will bring success to their families in the future.

Isiolo First lady Wato Kuti suggested that circumcisers should also be educated on the disadvantages of FGM to prevent them from engaging in the dangerous cut that can injure young females.

Mrs Kuti who was accompanied by her Nakuru Counterpart Elizabeth Kinyanjui called on circumcisers to surrender themselves and do way with the tools they were using in order to be considered in other productive income generating activities in their respective counties.

At the same time she urged assistant chiefs and chiefs to apprehend FGM and early pregnancies perpetrators so that they can be charged in the courts.

Rev Jane Bitok, one of the trainers revealed that the girls while in camp apart from being trained about the harmful traditional practices also were taken through reproductive health and hygiene, how to handle relationships, good morals and ethics, HIV and AIDS scourge, adolescence and body changes as well as learning biblical teachings.

Rev Bitok said their main aim is to empower the girls to learn the negative effects of some retrogressive practices which will guide them not to for fall prey to circumstance that can make them become mothers before their right ages.

Others leaders present during the graduation ceremony were director of National irrigations board Grace Kiptui and Rose Kamuren, the wife of Baringo South Member of Parliament.

The program is initiated by the office of the first lady Baringo County in collaboration with other societies and organizations such as USAID, World Vision and “Irip Gaa” a community based organization.