In an effort to increase livestock production, considering that 86% of our farmers depend on livestock production thus Baringo county government has partnered with constitution and reforms education consortium (CRECO) and centre For Enhancing Democracy, Good Governance (CEDGG) with support from Deepening Democracy program (DDP) to strengthen the local farmer groups to effectively engage with the county government in provision of livestock extension services. 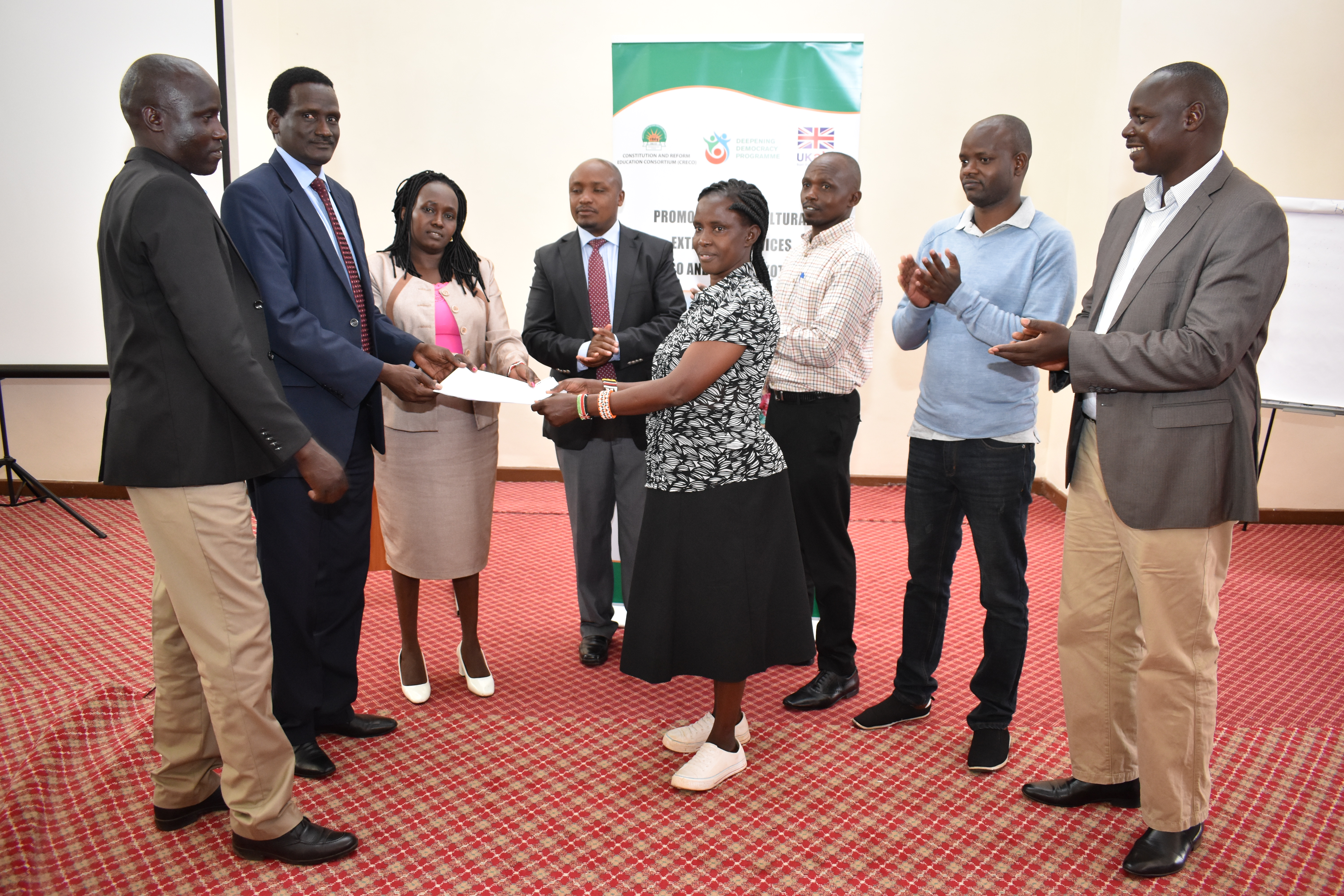 CEC for Agriculture, Livestock and Fisheries Thomas Ole Nongonop presenting a certificate to one of the farmers groups after attending a workshop on Agricultural extension services.

The initiative conducted one month long farmers’ sensitization meetings and trainings to capacity build farmers in 14 selected Ward on various ways of developing their livestock farms and more so on proper ways of engaging the county government to articulate their priority needs.

During County public participation forums on budgeting, livestock farmer’s issues rarely get to be addressed through allocation of resources that is why CRECO and DDP organized the farmers to champion for their welfare in budget making processes.

The organizations were able, after the conducting 86 workshops and trainings that reached 7,310 farmers, to come up withWardLivestock Oversight Committee (LOC’S) formed by the farmers.

CEDGG Programs Officer Evans Kibet said they are also conducting social audit on County livestock projects so that the findings and recommendations can be utilized by the Livestock Oversight Committee (LOC) and government agencies.

Kibet believe that since farmers play an integral component in the sector, they must be involved in decision making on the kind of development projects that will create a positive impact on their farming activities.

CEC Devolution, Scola Kimeliapplauded the partners for their great commitment to improving livestock production by offering extension services to the farmers.

“I understand the challenges that farmers face during dry seasons and the county government has put in place mitigation strategies to address such emerging challenges particularly up scaling water provision by drilling boreholes, water pans and creating pasture fields,’’ said Scola Kimeli.


On his part,CEC Agriculture, Livestock and Fisheries Thomas Nong’onop vowed to implement the recommendations put forward by the stakeholders so as to improve livestock production and build resilience among communities.

He commended the CRECO, CEDGG, DDP and LOCs for the initiative saying it will enhance extension services that the government has been implementing. He challenged them to extend more information and knowledge gained to other livestock farmers.


Moving forward, the county government is committed to facilitate civic education and public participation and increasing the number of extension officers to fully disseminate agricultural extension information and advisory services.