Baringo County is situated in the Rift Valley Region and shares borders with 8 counties namely, West Pokot to the North West, Turkana to the North, Samburu to the North East, Laikipia to the East, Nakuru to the South, Kericho and Uasin-Gishu Counties to the South West, and Elgeyo-Marakwet to the West. The County is divided into 6 Sub-Counties, namely Baringo South, Mogotio, Eldama Ravine, Baringo Central, Baringo North and Tiaty 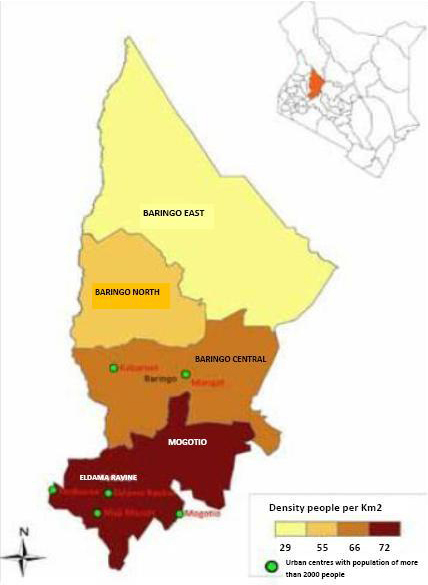 The County occupies an area of 11,015 square kilometers and had a population of 555,561 people in 2009 and projected to be 723,411, 853, 515 in 2017 and 2022 respectively. The main ethnic communities inhabiting Baringo County are the Tugen, Pokot and Ilchamus with minority groups such as the Endorois, Nubians, Ogiek, Kikuyu and Turkana.